Do What You Want

My Buckets for St. Baldrick’s fundraiser, a 3v3 basketball tournament held in Syracuse, NY, raised over $10,000 for childhood cancer research on March 20th. While this event surpassed my fundraising goal, it also had an impact even more significant than anything I had experienced in 10 years of fundraising for St. Baldrick’s.

I became involved with the St. Baldrick’s Foundation 10 years ago after hearing about the local Syracuse, NY event at Kitty Hoynes Irish Pub & Restaurant from family and friends. I was intrigued, but as a 7-year-old, very nervous about having my head shaved. Earlier that year, I spent several days in the hospital with pneumonia. I didn’t understand cancer much then, I couldn’t even spell it, but I knew I hadn’t enjoyed my time at the hospital and I didn’t think kids should have to go through anything like that. 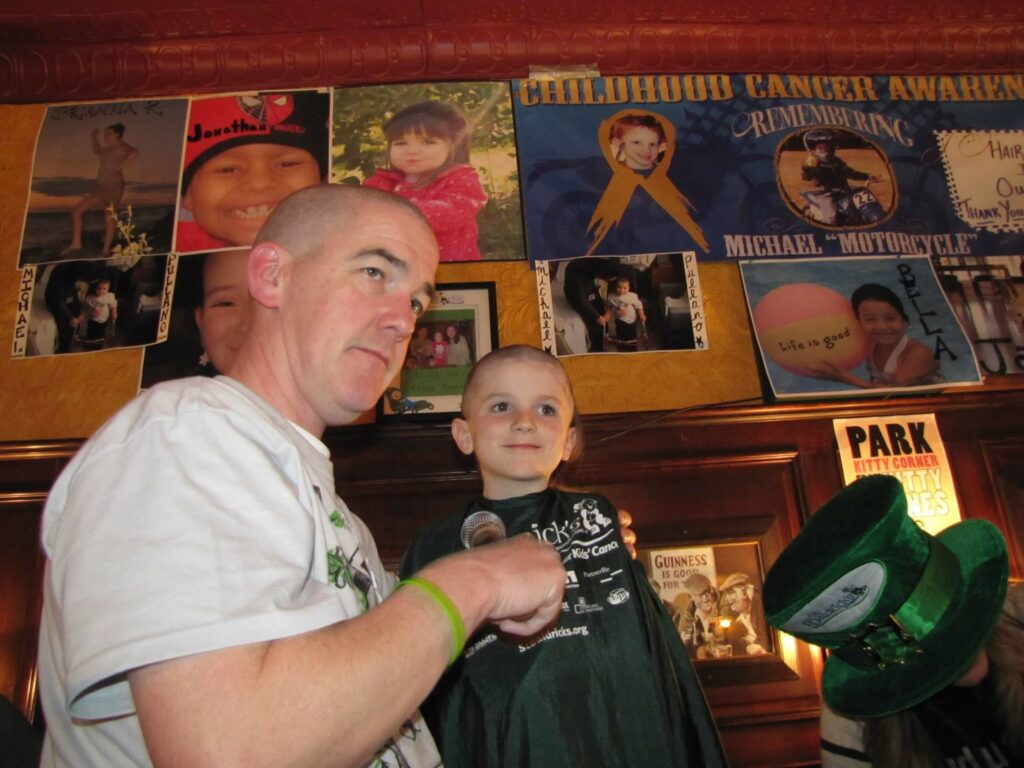 Bodie at his first shave with Emcee Chow Downey

With this in mind, I decided to shave. I called my family members and wrote a letter that I took door-to-door asking for donations. I surpassed my goal and raised over $3,000.

That first year I began using two fundraising tactics that helped me greatly over the next eight years of shaving: a hand-written letter to ask for donations, and a similarly hand-written, personalized thank you note after receiving them.

The day of my first shave in 2012, I was filled with nervous excitement. When it was over, I said it “tickled so much it hurt,” but also that I felt “spectacular.” I had two main takeaways: I wanted to do it again, and I wanted to go bigger.

The next year, I raised my goal, but more importantly, started my own team. We raised $10,000, and shaving with a team of my friends made St. Baldrick’s even more fun.

In 2014, the Baldacious Baldies grew bigger and we raised $16,000. Some students from Syracuse University did a short movie about us and we were featured in the local newspaper. It all felt very cool to 9 year-old-me. I loved checking the Top of the Charts board every day to see where I ranked, and for the first time I was near the top of the list.

When I turned 10, I started to gain a better understanding of cancer when I met a child, 4-year old Ocasio, who had a brain tumor and was given only a few months to live. Ocasio was one of my honored kids that year, and meeting him inspired me to fight harder for kids with cancer as I was shocked by the devastation the disease caused. I began to raise more money and to build my team by recruiting more friends. 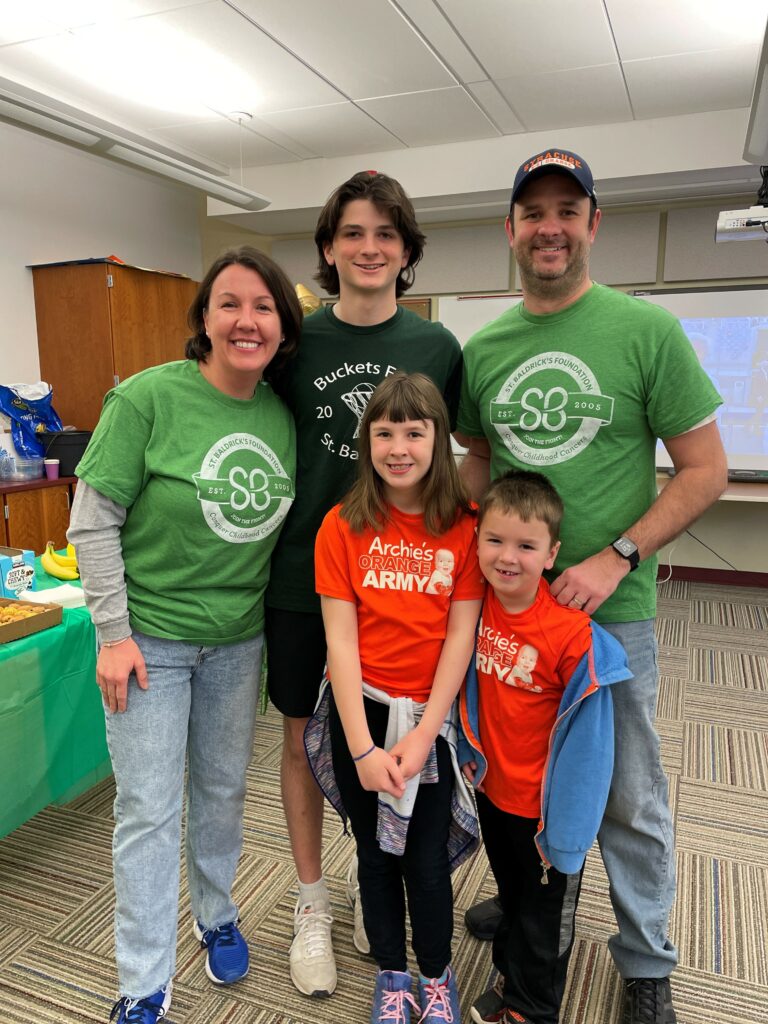 Bodie with Archie and his family

Each year I added more fundraising methods. I put jars out at local businesses and emptied them every week, and I collected bottles and cans under the slogan “All the pennies count!” I wrote a rap and made a beat on Garageband and posted it to my page. That year I was the No. 1 fundraiser at Kitty Hoynes, raising over $16,000. The Baldacious Baldies had grown to 25 members and raised $37,000.

Going into my 8th year of shaving, I met a boy named Charlie, who was two years older than me who had a DIPG brain tumor, which has no viable treatments. I was moved by the way he talked about his cancer, and his ability to be so composed about it at such a young age. That year, I started speaking at local Rotary clubs and my church, and worked with a local gym on a charity workout. By now, I was immensely motivated to fundraise by all of the kids I had met, especially Charlie, as I saw someone my age battling cancer, and understood how difficult of a thing that would be. I raised $27,000 that year, my team raised $54,000, and I was named a Knight of the Bald table for shaving for 8 years.

Charlie died in August 2019. I was stunned and upset when I found out, but at that moment, I knew I would try my hardest to raise as much as possible in his honor for my final shave when I was in eighth grade. In my letter that year, I wrote that my goal was to “inspire others as I had been inspired.” I made another video, increased all of my usual fundraising activities, and pushed my team members to raise as much as they could. Ultimately, I was able to raise over $31,000, and my team raised nearly $55,000. I was the No. 1 fundraiser at Kitty Hoynes, and my team was the No. 1 team at Kitty Hoynes. It was an incredible last shave. 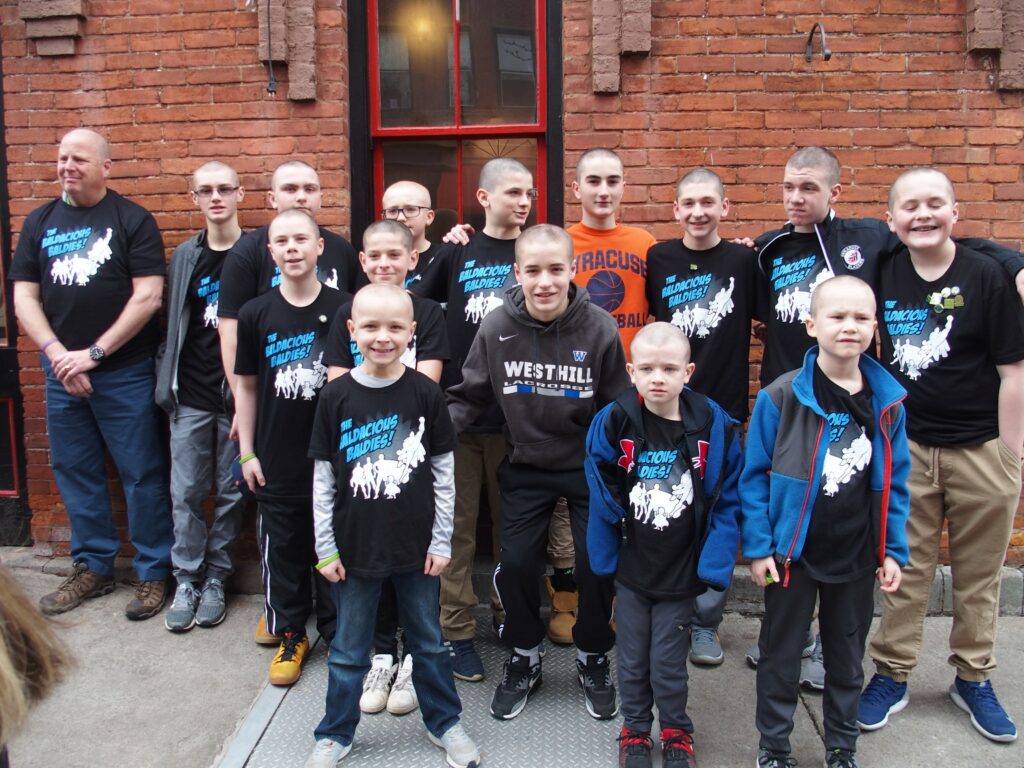 After my last shave I wanted to continue supporting St. Baldrick’s, but I wanted to keep my hair. I didn’t know how I could help without shaving. I filmed a video with legendary event emcee Chow Downey at Kitty Hoynes to promote the next shave, but COVID hit and everything was canceled for two years. It was frustrating that I couldn’t help. I knew, when I could, I wanted to do something bigger, I just didn’t know what.

Inspiration came after volunteering at a soccer shootout fundraiser. I thought I could do something similar with basketball. Basketball is the most popular sport in my school district from elementary school through high school, and I have great memories of going to basketball camps there and playing in 3v3 round-robin tournaments. Kids love participating in these types of tournaments.

I discovered St. Baldrick’s “Do What You Want” fundraiser option, where you can create any fundraiser you want with their support, and I knew this was a perfect fit.

However, I was nervous of what others would think about my idea, and didn’t tell anyone outside of my family for a few months.

The first person I told was my former JV basketball coach and gym teacher, who loves basketball and runs multiple basketball camps and leagues. I was incredibly nervous, but he was extremely supportive right away and offered to help. I reached out to more school officials to get their approval, with similar levels of anxiety, and everyone strongly supported the idea. But it was already December, and if I wanted the event to happen in March, things would have to get done fast.

At this time, I was busy balancing running track and performing in the school musical, and I felt like I had no time to plan the event, yet the weeks kept slipping by. I considered pushing it back a few months but I knew this wasn’t what I wanted.

I wanted to get back to raising money for childhood cancer research, and fighting for the kids battling the disease. On the last possible day, I submitted paperwork for school board approval of the event. With that, Buckets for St. Baldrick’s was official for March 20, only two months away.

There was no turning back now.

I created my fundraising page on the St. Baldrick’s site, wrote my letter and worked with my old coach to develop the registration form. We started promoting the event with flyers, school announcements and social media posts. I designed a T-shirt with the help of our high school art teacher, and with the help of an old shaving teammate, reached out to local grocery stores for food donations. On top of that, I sent emails to business owners asking for sponsorships to cover my event costs. I wanted every penny possible to go to St. Baldrick’s.

By February, I had sponsors and donors, a T-shirt design and many old Baldacious Baldies lined up to referee. We received bracelets, T-shirts, pins, and buckets from St. Baldrick’s, and designed promotional posters and posters thanking our sponsors. I set a goal to get 40 teams and $5,000 raised.

Everything was coming together and there was seemingly an incredible amount of community support, but two weeks away from the registration deadline, we had just a handful of teams registered and just over $1,000 in donations.

Thankfully, as the weeks progressed, the teams rolled in and the brackets started filling up. The day before the event, we went to the school to hang the St. Baldrick’s banners, get the TV working to stream the March Madness games, and set everything else up. When we were done, I was confident we were going to have a great event.

The morning of Buckets for St. Baldrick’s, the gym buzzed with excitement as the first division of second and third graders arrived. Parents filled the bleachers to watch, something I hadn’t expected, and the gym was electric. I kicked off the event with a quick speech and we were finally underway. 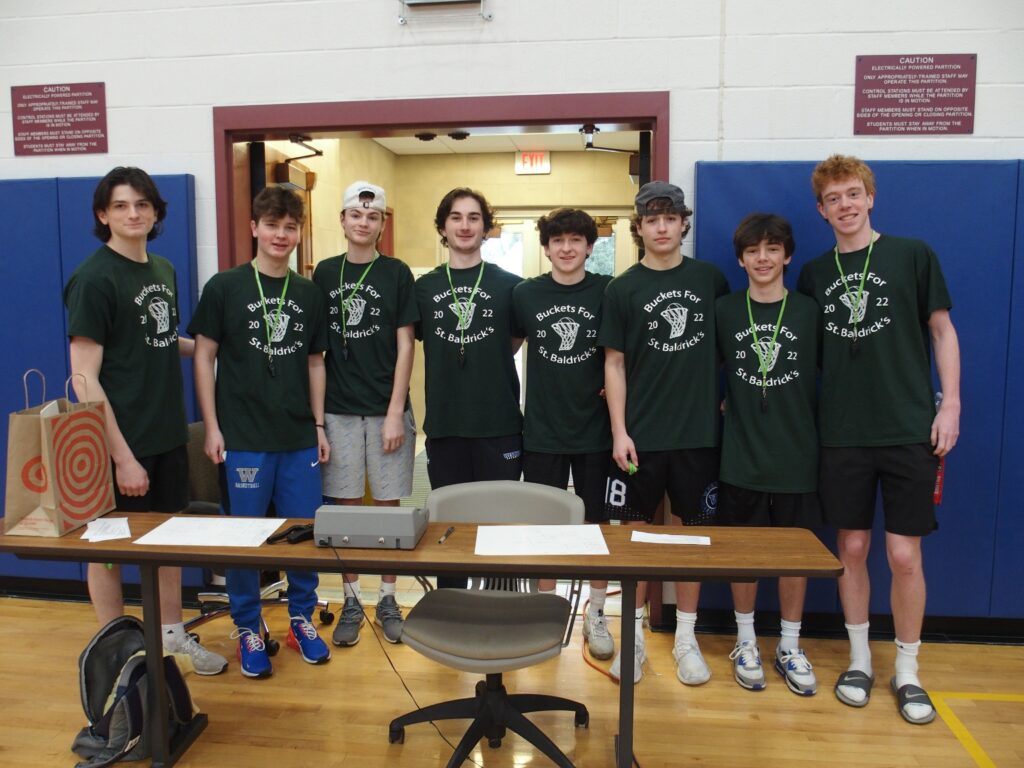 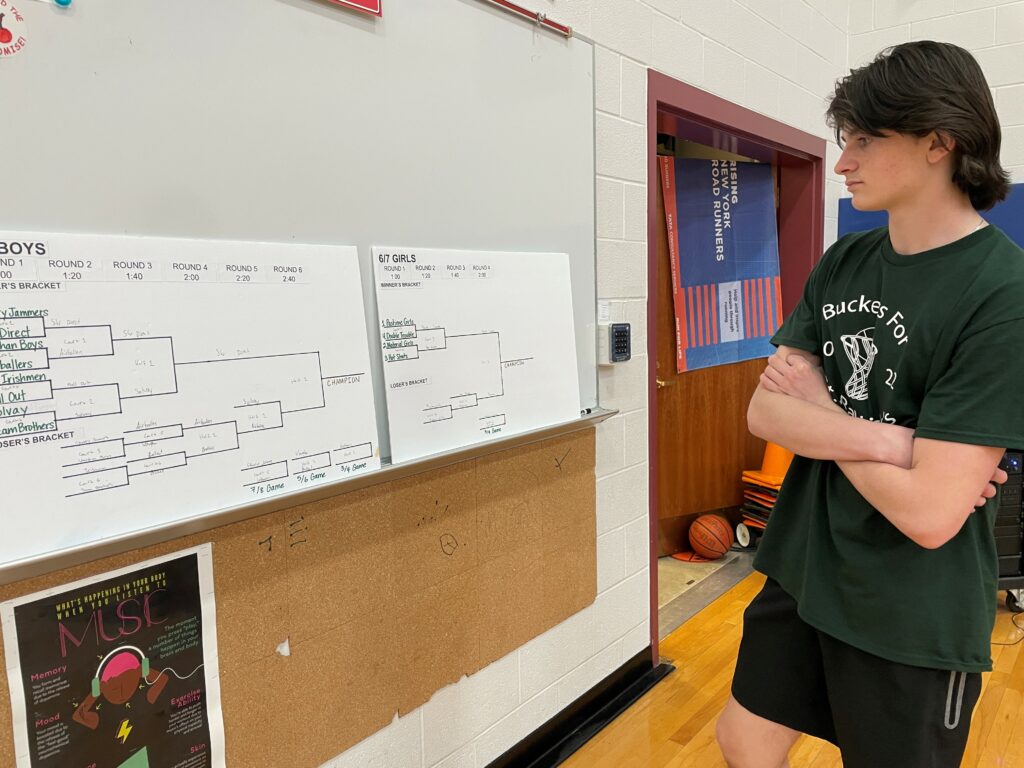 A decade of fundraising for St. Baldrick’s and a year of planning had led to this incredible event, and it felt great to see my idea that once seemed far-fetched become a reality. The energy throughout the school was immense, with kids, parents, coaches, and volunteers all coming together over basketball to fight for the cause. We had families in the stands touched by recent cancer diagnoses and two teams supporting Luke’s Army, another St. Baldrick’s fundraising powerhouse. Many people were so moved by the kindness of the fundraiser that they donated at the door, and we raised $500 more that way.

The tournament truly portrayed the basketball frenzy that is March Madness, somewhat flying by the seat of its pants the whole day. I also never expected the strong sense of community that was created by the tournament, and in some ways, I felt like I was having an even bigger impact than when I shaved my head. To have my idea finally come to fruition, and have it create such a community effort for children’s cancer research was truly amazing, and a completely new feeling I had not yet experienced in my journey with St. Baldrick’s.

The tournament has now raised over $10,000, but more importantly, hopefully, sent a ripple effect of good deeds and hope throughout our community.