The League of Legendary Heroes is an order of dedicated volunteers who’ve participated in St. Baldrick’s Foundation events for three or more years. Each year, St. Baldrick’s names a League Champion to lead and inspire this group to raise money for lifesaving childhood cancer research. 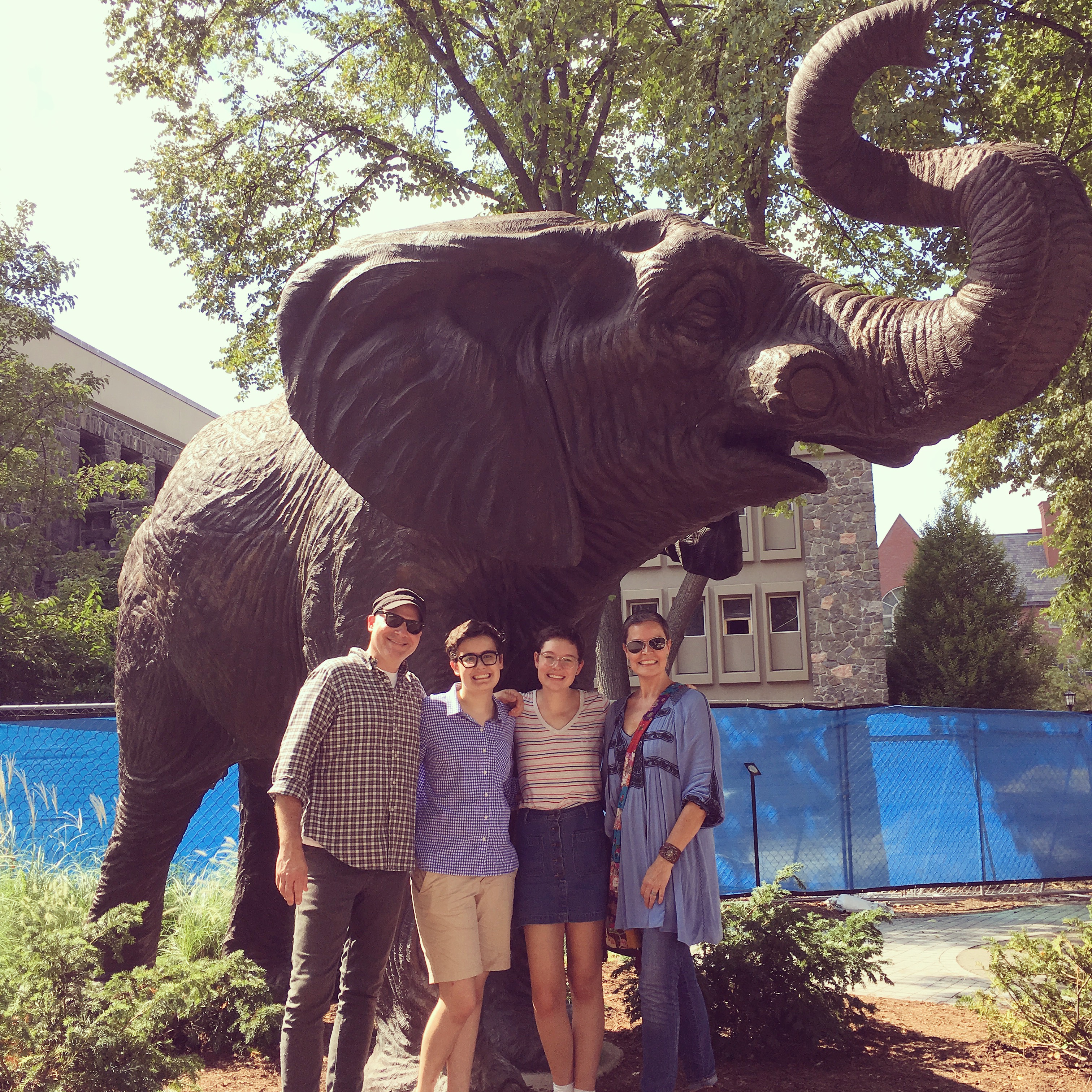 Our 2019 League Champion, Georgia Moore (third from left), appears with her family at Tufts University.

Georgia – who loves art, books, and swimming – has been through a lot since being told she had cancer at age 10. The first challenge was losing her hair.

“The day I was diagnosed and heard that I would lose my hair, I already felt awful and didn’t understand what was happening to my body,” Georgia said.

“But my mom assured me that my hair would grow back (and that my dad’s hair would never grow back!), and after that, I was okay with it.”

Cancer, Chemo No Match for Georgia

Georgia’s refusal to let ALL erode her positive spirit served as an inspiration for her family members, all of whom have rallied around her since the day of her diagnosis.

In 2012, Georgia’s mom flew to Los Angeles to shave her head alongside the 46 Mommas, a group formed in 2010 (the same year Georgia was diagnosed) to represent all mothers who make the cancer journey with their child. Three years later, Georgia’s younger sister and her grandfather both followed suit, shaving their heads to raise money for childhood cancer research.

Georgia’s Cancer Beaten, But Not Forgotten

In 2012, after 28 months of intense treatment, Georgia conquered ALL. She has since moved on with her life, going back to school and focusing on her future.

Georgia never forgot the people she met or the challenges she faced during that time when cancer dominated her young life. Along with her family, she’s continued working with St. Baldrick’s to raise money for childhood cancer research. That’s meant shaving her head again – a big move for a teenager.

“I’m shaving my head because I beat cancer,” Georgia said in April 2017, not long before she shaved her head again. “I’m going bald because this time, I have a say in the matter, and I can make a difference for kids who don’t have that say.” 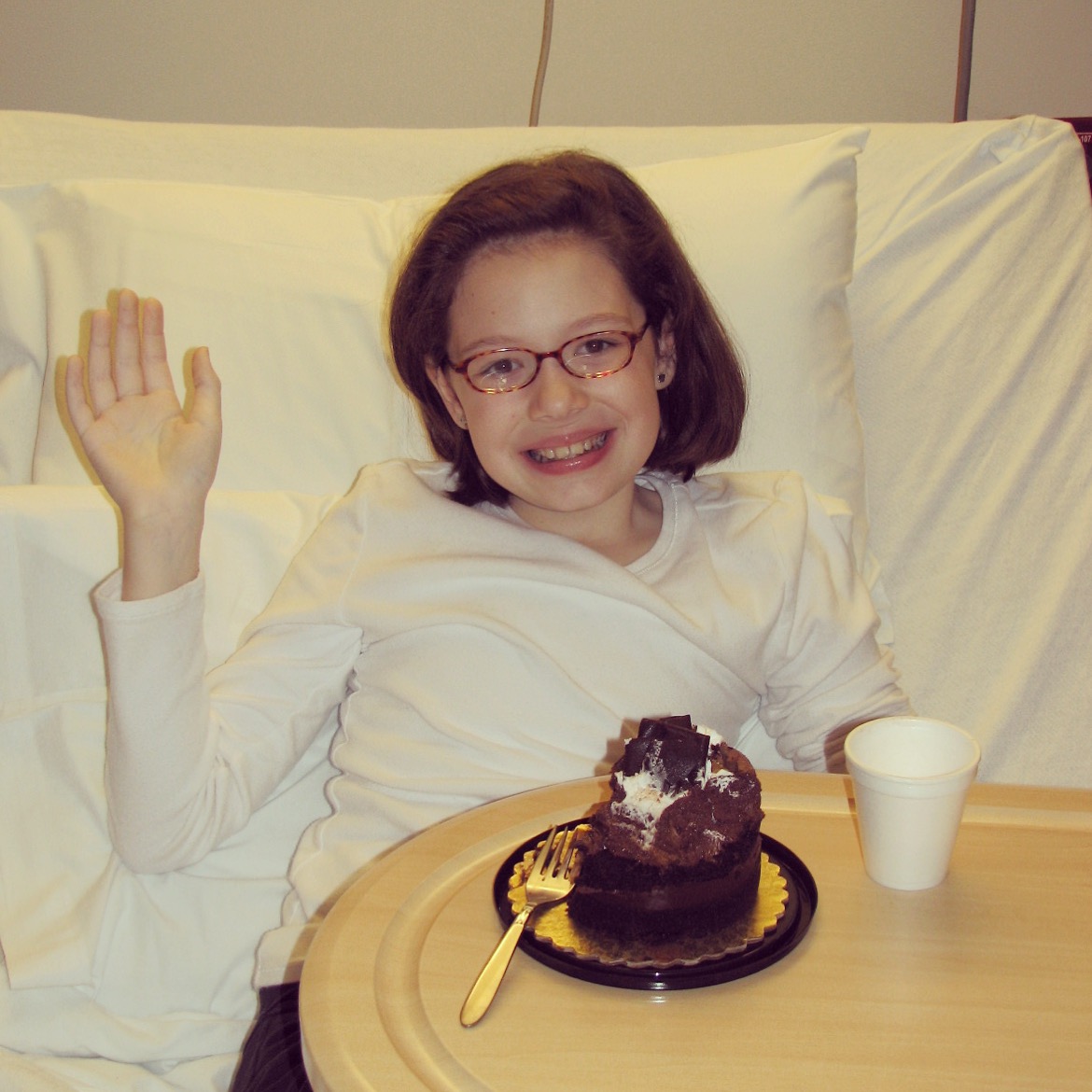 Georgia celebrating her tenth birthday in the hospital, where she learned she had acute lymphoblastic leukemia.

And she has made a difference! In addition to shaving her head, Georgia has led a St. Baldrick’s Hero Fund – called the Georgia and the Peachy Keens Hero Fund – that’s raised an incredible $160,000 for childhood cancer research. That money has gone towards a fantastic cause – specifically, a Supportive Care Research Grant for Dr. Naomi Winick, whose work focuses on helping children manage the long-term health consequences of ALL.

Studying Art and Becoming a Knight of the Bald Table

Today, Georgia is a freshman at Tufts University, a prestigious research institution in Medford, Massachusetts. A passionate artist, she’s excited about being close to Boston’s Museum of Fine Arts and having the opportunity to study the works of Japanese author Haruki Murakami. Looking ahead, she’s focused on finalizing her majors, finding a place to study abroad, and choosing the right graduate school.

Although her life no longer revolves around cancer, Georgia hasn’t forgotten the many extraordinary people who helped her defeat ALL – or the kids currently facing it. It’s why she continues to be involved with St. Baldrick’s and why she’s excited to be inducted as a Knight of the Bald Table this year.

“It feels awesome, especially when I think of how far I’ve come since my first St. Baldrick’s event two months after diagnosis,” Georgia said.

“St. Baldrick’s has been a big part of my cancer journey, and I’m honored to represent other Honored Kids as the 2019 League Champion!”

To join Georgia in the League of Legendary Heroes – or to get promoted to your next ranking within the League – register for a head-shaving event in your neighborhood today.

We won’t email you every day, but when we do, you’ll want to read it.